He was born in the Bessarabian family on 19th August, 1973, at village Tomay of Ceadar-Lunga district of the Moldavian Soviet Socialist Republic, which is on the border with Ukraine. Father is Gagauz, mother – Bulgarian.
He received his secondary education at the Tomay high school (1980 – 1990). The first higher education was received in Comrat State University of the Republic of Moldova, by specialty – jurisprudence (2007 – 2008). He received a degree in the Odessa National Academy of Law, as well as academic degree – Master of Laws, Specialization: Governance and international legal relations.
In the same period of 2007 2008 he had higher courses of foreign languages in Kyiv National University of T.G. Shevchenko on the Turkish language, where received the highest level of education. Yuri Dmitrievich began his professional career in 1997 on JV “ASLES LTD”, Odessa, as deputy director. From 2001 to 2003 – the director of JV “ASLES Ltd”, Odessa. Since 2003 and until now – the director and founder of the “Bosforles” Company, Odessa. In addition to his professional activities, Yuri Dmitrievich pays great attention to social activities. He is Deputy Chairman of the Board of the Gagauz national-cultural society “Birlik” (Unity). Also he was awarded the Diploma of the State Committee of Ukraine on Nationalities and Migration.
Just being a freelance assistant – consultant of People’s Deputies of the Supreme Rada of Ukraine of V convocation Rizhuk Sergey Nikolaevich, and VI convocation Kozhara Leonid Alexandrovich, combines with the position of the Secretary of the parliamentary group of inter-parliamentary relations of the Supreme Rada of Ukraine, with the Parliament of Turkey.
He is fluent in Ukrainian, Russian and Turkish. He is fair in Bulgarian, Romanian, English and German. Married, wife – Tatiana. He has two children, a son and daughter-Dmitry and Eva. 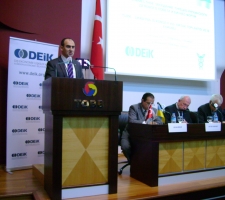