V. National specific of region and the solutions to the problems of language, literature, civil rights and religions.

On specified at the beginning of the project the ethnic composition of the Bessarabian region of Ukraine, we see that in these areas there is no dominant nation, which would amount to a large part of the total, but the area has never in history had no ethnic conflict, all people lived in peace and friendship. Large color to this end brings culture, everyday life of Bulgarians and Gagauz, who settled in this area in the years 1763-1820, after the relevant royal decrees. Over the past more than two centuries, the history of these peoples, together with the other peoples who inhabited these regions has turned into a blossoming uncultivated steppe and fertile land. The task of the new Ukrainian government is not to disappoint these people in their love for Ukraine. That’s what life is embodied in many projects, some of which are listed in this paper. The central government should provide an opportunity to develop the language and culture of the peoples living in this region is compact, helping to provide training in the schools of minority languages. Necessary to conduct folklore events, prepare specialists of national minorities in higher and specialized secondary educational institutions in the country.
You can put up on the official level of use of the Bulgarian, Moldovan and Gagauz languages in signage and on rural and district councils, as well as road signs in areas where the users of these languages, along with the mandatory use of the state language.
For these people, Ukraine should become a mother, not only in their passports, but also in our hearts. In parallel, should be instilled a love for the country and its official language, then eventually Ukrainian language will be the language of international communication for all peoples living in the province.
Multi-ethnicity and multiculturalism in Ukraine – it is our most important resource, a strength, not a lack. The Constitution of Ukraine, the President, the Government should ensure the equality of all citizens before the law, freedom of speech, freedom of religion, state non-interference in the affairs of the church. There must be the guarantor of the lack of discrimination on ethnic and religious grounds. 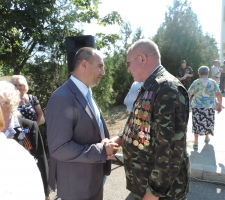