Historical and statistical information of the region.

The area of southern Bessarabia in antiquity was the frontier between, on the one hand, the Danco-frankish tribes, on the other hand, the Ukrainian steppe nomads – the Scythians.
From the VI century BC to 106 AD – Ancient Greek period. From 106 years before the V century – the Gothic tribes lived here, subordinated to the Roman Empire and its province of Dacia. From the V century and up to 900 years of its alternately conquered the Avars, the Bulgar-Turkic nomads, Hungarians, Pechenegs, Cumans, Mongols and then the Nogai tribes were settling here in the 900′s. From the period of the Nogai territory between the Danube and the Dniester was called Budzhak or Bugeac steppe. By the end of the 900-th – the beginning of 1000-ies appeared here and Slavic tribes with Ulichi and Tivertsy. From the X to the XIII century, the area is part of the Kievan Rus’ on Galicia-Volyn principality. At the end of the XIII century Genoese colony were based on the lower reaches of the Dniester, and here revived trade.
From the middle of the XIV century, the area became known as Bessarabia became part of Moldavia, thus became heavily populated Moldovans, which until the beginning of XIX century, occupied a dominant position here.
In 1503, Turkey won the first Danube region, and a little later, the whole territory of the Prut and the Dniester River where built the fortress of Izmail, Bender and Akkerman. From 1771 to 1812, the area 5 times was delivered from the hands of the Ottoman Empire at the hands of the Russian Empire, until finally went to last ones in the Treaty of Bucharest in 1812. In the same period for the settlement already devastated by war territory, according to a number of royal decrees colonists settled here (mainly Bulgarians and Gagauz), which was obtained by use of 50 acres of land. They are moving from the territory of Bulgaria, where military operations were continuing. Also included in this period were resettled landless residents of Ukraine and various imperial Russian groups (molokans, Believers, etc.), small groups of Albanians, Germans and the French.
After the 1917 revolution swept this region anarchy. On January 1918 Romanian army occupied the area. In 1940, the pact of Molotov-Rebentropa sent Bessarabia to the Soviet Union, where on the December 7, 1940 Izmail region was formed on the territory of today’s 9 districts of southern Bessarabia. Izmail region became part of the Ukrainian SSR and ran until February 15, 1954 (except for the period of the Great Patriotic War), after which it was merged with the Odessa region of Ukraine.
August 24, 1991 the Suprene Rada of Ukraine declared its independence, which includes the southern part of Bessarabia.

The boundaries of the region determine the naturally prevailing geographical location:
From the east – the Dniester River (region located on the right bank of the Dniester River);
From the north, it borders Ukraine and the Republic of Moldova;
On the west it borders with Romania and Moldova on the mouth of the River Prut and the Danube;
In the south – the natural border runs along the Danube River and Black Sea.
The composition of this region consists of nine administrative districts of Odessa region – Belgorod – Dniester, Saratsky, Tatarbunarskiy, Artsyz, Tarutinsky, Kiliyskiy, Izmail, Reni and Bolgradsky and 2 cities of regional subordination: Belgorod – Dniester and Izmail.

Transport corridors in the region 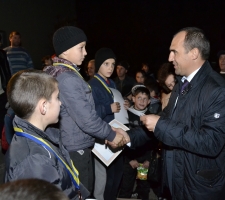