II. Modernization and development of the Bessarabian region of Ukraine

Revival, modernization and development of the region, we can achieve if put before the country four objectives :
1. The industrialization of the region.

The region needs to make the industrial revolution, to return here that he has lost over the last 15-20 years – the roads, the work of people.
For 10 years it is possible to create a new economic base of the region.
We should start, in my opinion, with the roads. Having started the construction of roads in the region, we will bring them to the construction of the local population by providing them with as soon as possible the work will involve cash flow to the region. By constructing the road, we will return here youth edge that almost 90% leave their places of origin in search of a future.
The task number 1 in this issue is of the construction of the route (M-15) Odessa – Reni, which is 261km long with a bridge length of 5.7 km through the Dniester estuary, which coincides with the ring road transport corridor of Black Sea Economic Cooperation. The road gives you the shortest and quickest way out of Ukraine and the Russian Federation on the southern Balkans, southern Europe and Turkey.
To date, seriously ponder this question Ukraine has no roads, guaranteeing a clear communication to its apartment rent, as the existing two alternative roads have a lot of problems:
The first road passing the interval Mayaki – Udobnoe comes to 7.7 km in Moldova, and despite the August 18 1999goda signed between Ukraine and Moldova to the Additional Protocol to the Treaty on the state border is the subject of constant complaints and grievances of the local Moldovan population, threatening to close the road . Also this road is periodically flooded during floods and pieces of the river Dniester;
Second way is to bypass the Dniester estuary through Ovidiopol – Zatoka – Belgorod – Dniester which bandwidth is so small that in the summer there are many kilometers cork on some sections, and also has on its way adjustable railway bridge, which is in poor condition, with stable risk of failure, with a daily layout for passing ships following in Belgorod – Dniester port. The decision to build the route Odessa – Reni several times to make different decisions of the Cabinet of Ukraine, but the final result for the construction of the highway linking and ensuring the economic, political and national security of this region of Ukraine has not been done yet.
Further objects of the issue is the rehabilitation of the existing road to the 1940 car ferry – passenger crossing the Danube between Izmail and Reni (Orlivka – Isakcha), which attract huge cargo flow today from Ukraine and Russia to the Balkans, through the Republic of Moldova. So just from 2008 Ukrainian carriers carried about 23,000 transits through Moldova to deliver cargo to the Balkan countries and Turkey. The necessary investments in the Ukrainian part of the project crossing the experts evaluated nearly 4 million dollars; it is disproportionately small part of the state investment compared to the benefits that it will get together with the people of this region.

It is also necessary to pay attention to the rehabilitation and construction of certain strategic points of the segments of roads; it is, for example, Bolhrad – Renee and Bolhrad – Tarutine, which today are complicated transit stopovers in Moldova. The condition of roads of Reni and Tarutino areas is one of the worst in the Odessa area.
It is important, in my view, to reconstruct, and in some areas and rebuilds the road along the Black Sea from the village. Inflow to the city Tatarbunary passing through the towns of Tuzla and Spa, which will develop tourism in the area. Construction of roads will modernize and develop different task industrialization of Bessarabia – Ukrainian Danube port complex with its ports of Reni, Izmail, Kealia, Ust-Danube, which suffered a great loss due to the trade embargo against Yugoslavia in 1992-95 years and the destruction of bridges in the Yugoslav section of the Danube in 1999, in consequence of which 80% of the traditional cargo turnover (Slovakia, Hungary, Austria, Germany) were overlapped. But in 2008, it has been fully restored by the passage of vessels already the Serbian parts of the Danube, and now the future of Ukrainian ports on the Danube quite promising. Why only the traffic should flow Ukrainian ore, coal and grain in the European Danube countries.
Some of the steps it has already taken towards this, for example, there is a difficult process to return the navigability of the Ukrainian part of the Danube, and in the first eight months of 2009 for the first time since the year 1992 by the Danube on Ukrainian territory there was more ships than Romanian. Now we have to pay attention to the modernization of our ports on the Danube:

It is also necessary to reconstruct the singular and the largest existing port on the Dniester River Belgorod – Dniester with the deepening of his passing precipitation (currently 4.0 meters) and the entry of vessels around the clock input by setting the luminous buoys on navigable canal sea-port (length 14 km), passing through Dniester estuary.
In the above context, it should also restore the passenger traffic between Odessa and the Belgorod – Dniester, Vilkovo, Kiliey, Ishmael, which existed until 1991, to carry out in speedboats such as “Rocket”, and open movement of boats between Zmeinoe with Odessa and Vilkovo. An additional aspect of the development of transport industrialization of the region is the reconstruction and rehabilitation of the airport “Ishmael”, which still has by far the certificate of the State Committee on Aviation and opens the border crossing point.
Several times during different periods of the government it was discussed the issue of restoring the railway track on a segment (length 19 km) from the station Beresino (Tarutinsky district) to Moldovan station Besarabyaska, which worked until 1997., which will guarantee delivery of w / d cargoes going to date the only path through the unstable region of Trans-Dniester.
An important part of the industrialization of the region is its energy security. For this it is necessary to finish the job this year of the project’s power line (power line) “Adjalyk – Usatove” with a mix of electric Bessarabian areas to the rest of the Odessa region, on the financing of this project, the EBRD is ready to allocate 40 million euro. To date, the bulk of electricity in these areas comes with Moldavian GRES. Also, the previous government planned to build two steam-gas power plants in Izmail and Bolhrad, but these projects have remained on paper. The region is quite promising energy in the form of solar energy because of the large number of sunny days per year and wind power because of the topography of the steppe.
Through the industrialization of the region, it is necessary to realize a number of environmental projects, among which the most important are:

a) Providing high-quality drinking water to the population of the region suffering today lack sewage systems and the rage pollution sources of water supply;
b) Purifying the region from the warehouses of toxic chemicals left over from the Soviet era;
c) The cessation of natural tree felling and politics of mass planting of greenery, with a mandatory reduction of planted field;
g) To carry out research work on the restoration of some of the major freshwater lakes in the region (Sasyk-Kunduk, Ialpug, etc.) 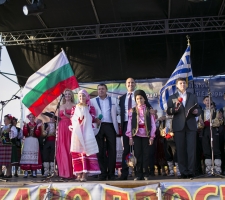