2. The development of regional branches of agriculture.
We mentioned earlier that in Soviet times the population of districts Bessarabian region of Ukraine was quite wealthy and villages with a population of less than 2,000 people almost were not. We need to bring back life to the region, as did our ancestors 200 years ago here on the virgin prairie, for which we need to accelerate the development of Ukrainian agricultural and industrial method to return the organization of production. Today, the land of collective farms and state farms destroyed sites ranging in size from 2 to 3 hectares of villagers who are not cultivated or, at best, leased to small agricultural enterprises. The latter do not have the technical and financial ability to handle them, or create competition for foreign farmers. We must get away from the simple production of agricultural raw materials (wheat, corn, soy, and sunflower) and go to processing it into growing areas. First of all, create a network of factories for the production of bread flour and flour products, to begin construction of large canneries, as well as oil and fat, and meat and dairy plants.
If in some agricultural sectors of the region appeared progress (e.g., grain-industrial complex and poultry), the livestock in the region practically does not develop, or rather, that every year reduced the number of livestock. Farm for the breeding of cows, pigs and sheep is almost gone. Sheep Development should be given special attention, highlighting the initial grants and soft loans, due to the extensive experience of the local population in the industry, as well as favorable climatic zone and the steppe zone of relief in this region.
For all this, we need to minimize bureaucracy and to fully support both domestic and foreign investors investing in the construction of agro-processing, in the form of exemption from income tax of up to three years (for example, Bulgaria and Romania) or introduce a system of state grants to the best projects of agro-processing .
Our country has become the world leader in the food market, but we cannot do that if we lose or not to use the latest technologies of farming, storage and processing of its products. A separate problem that must be addressed recently in the village – this is the level of training of workers and managers in the agricultural sector. Often it is difficult to understand the processes taking place in the economy and to choose the way to overcome the problems with the realities of the market economy and global experience. For this it is necessary to create large farms, which in effect will solve the problems mentioned above.
In support of the state, though more significant needs not agricultural business, and the village itself. It is the village, both socio-economic structure, the foundation of the nation, the source of its culture and spirituality. The village – it’s not just agriculture. The village – roads, gas, electricity, water supply, sewerage, communications, medicine, education, consumer services, small business. Therefore, it should be sent here by the State budget funds, not benefits and subsidies into the pockets of businessmen, often irrational and wrong to use state financial support. 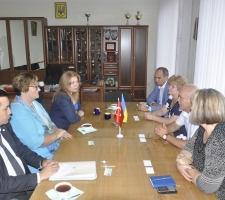