4. Military doctrine in the region.
To date, we are very well saying that the Bessarabian regions of Ukraine’s military doctrine are not, in the absence of the military as such in this huge area. At a distance of more than 200km from Reni to the Dniester estuary in Ukraine, except for the border service, there are no military at all. And this, despite the still oral territorial claims of some of our neighboring states in the region and the hidden issue of passports to Ukrainian citizens of these countries in these areas. This region is less than 100 years has changed four times statehood. I, and the vast majority of the inhabitants of these areas, do not want to be seen another change of a country of which they have become.
In this regard, we need to obtain a review of arrangements in accordance with which the troops were withdrawn from the area. And at least put in these areas and the air defense system of the motorized rapid reaction, and at best – to restore Artsyz military airfield (not yet pulled down its runway) and the Danube Flotilla.
We should also mention the issue of state approach to the military profession, its social security and housing guarantees. Without a solution to this issue’s defense army is resolved. 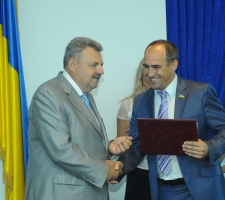