IV. On the development of the Euroregion “Lower Danube” and its role in the East-European project.

This project is quite interesting because it is the result of the initiatives of the Danube regions of three countries – Ukraine, Romania and Moldova, and not the central government.
Discussion of the proposal of the Ukrainian side at a conference in February 1998 in Izmail, led to the signing in August of the same year, a document on the establishment of the Euroregion “Lower Danube”. Since that time, regularly attend meetings of the Euroregion, which were due to be put in motion some of the common problems. Despite the fact that between all three parties there are certain political and historical differences, the regions of these countries have rejected them, and brought forward a qualitatively new form of international cooperation – border and cross-border. In the framework of the Euroregion we need integrate different levels and forms of international economic relations – from border areas to free trade (special) economic zones, joint ventures, and bilateral trade, scientific, technological and cultural cooperation.
I think we definitely need to develop the project, as it will encourage the regional leaders of the three countries, in person at the meetings of the project, to solve the problem of cross-border population and stop the leadership of some of our neighbors on a number of provocative actions against Ukraine on the Danube region. We are also pleased that the Euroregion project “Lower Danube” quite successfully developed, in contrast to other similar cross-border projects in Ukraine.
Euroregion “Lower Danube” is a good example of cooperation between the countries of the Eastern European space, which we must vigorously develop. We have very little attention is paid to Moldova, although for it is the largest and main economic partner. In this country, 8.4% are Ukrainians, who are the second largest nationality after the Moldovans. This is an example when the country itself is drawn to the development of relations with Ukraine. We need to attach them, and not just join anybody.
Similarly as an example is Turkey who has very large economic interests in Ukraine. In 2008, Turkey became the second largest trade country after Russia. Our metal manufacturing, chemicals, grain, sunflower oil, timber exported in large quantities in this country. Turkey has had similar problems in relations with the EU. After several diplomatic failures in the membership of the European Community, the country has committed itself to integration with its neighbors and is slowly becoming the leader of the Black Sea Union.
We need to follow the example of Turkey and policies with other countries in the East European area, united by common similar problems. In addition to Moldova – is Azerbaijan, Georgia, Armenia, Belarus, Russia and Kazakhstan. These countries we could offer four questions of general policy.

We can and must become the creators and leaders of East European integration project. 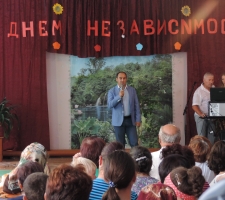